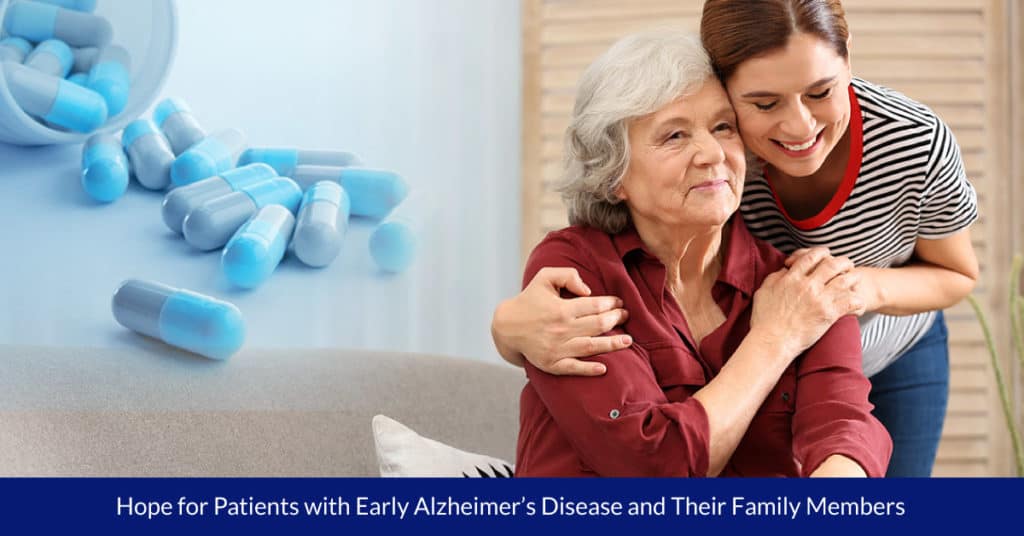 Losing who you are is essentially what the diagnosis of Alzheimer’s disease means. An irreversible and progressive brain disorder, it is the sixth leading cause of death, affecting over 6 million people in the US.1

The disease profoundly impacts those who are diagnosed as well as their loved ones:

I am writing today because I’m having a hard time accepting my husband’s diagnosis of Alzheimer’s Disease. He is only [age] and has no family history of the disease. . . They used to call him MacGyver because there was nothing he could not fix (a total think outside the box kinda guy). Now he takes out several shirts in the morning when what he’s looking for are pants. He’s completely confused and most of the time cannot put a proper sentence together. He cannot write, play games or do any of the handyman chores he used to do. . .

Having Alzheimer’s at such an early age puts unique pressures on families because, like my husband, the newly diagnosed patient is most likely still in the work force and does not have adequate savings to deal with an early “retirement.” In addition to losing our primary income, we also lost our health insurance (just when we needed it most). Many folks still have children at home, and/or are taking care of elderly parents as well. It is so terrible to have your future taken away; it’s hard to really understand unless you’re actually faced with this reality.

Much has been learned about Alzheimer’s since its first description in 1906. Research has delineated the disease processes in the brain affected by Alzheimer’s. The mechanisms—resulting in progressive loss of neurons—involve the build up of insoluble amyloid-beta plaques and the development of tau (or neurofibrillary) tangles.. Simultaneously, astrocytes — cells involved in maintaining the chemistry of signaling between neurons — and microglia—the macrophages of the central nervous system which remove debris and release cytokines— are disrupted.1 Neurons in the brain stop functioning, lose connections, and die.

Advances in positron emission tomography (PET) technology have allowed us to actually see and document the changes in the brain longitudinally. The precursor to Alzheimer’s is a diagnosis of mild cognitive impairment (MIC), 10-15% of which progress into Mild, Moderate, then Severe Alzheimer’s and finally to death from the disease.2

Research has also pinpointed the genetic mediators involved in the development of Alzheimer’s. The apolipoprotein E (APOE) gene increases a person’s risk, especially APOE ε4, which is associated with an earlier age of disease onset.1

These advances in understanding set the stage for the development of a new group of medications that not only treat symptoms but which actually address the pathology of the disease. The first, Aducanumab, received FDA approval in June through the accelerated approval program. Aducanumab is a monoclonal antibody that targets amyloid-beta, the source of the neuronal plaques. The double-blinded studies on which the decision was based found significant reductions in amyloid-beta plaque in patients who received treatment compared to controls. Aducanumab is available for those with MCI and mild Alzheimer’s disease. As part of the accelerated approval process, a further clinical trial to confirm the benefits of Aducanumab is underway and is expected to be completed in 2030.3

Two other anti-amyloid beta monoclonal antibodies have received breakthrough therapy designation from the FDA: Lecanemab and Donanemab. In one study, the highest doses of Lecanemab decreased amyloid-beta plaque and also decreased the clinical decline in patients compared to placebo. Further studies are underway.4 In a phase 2 trial of Donanemab, presented in the New England Journal of Medicine, patients receiving donanemab had less of a decline in their Integrated Alzheimer’s Disease Rating Scale (iADRS) scores after 76 weeks on the treatment when compared to controls.5

An article in The New York Times titled “The Last Day of Her Life” describes the decline of Cornell University professor, Sandy Bem, after her Alzheimer’s diagnosis and her decision to end her life before she completely lost her sense of who she was. With Alzheimer’s disease, she wrote, it is “extraordinarily difficult for one’s body to die in tandem with the death of one’s self.” 6 The spouse of an Alzheimer’s patient on Inspire discussed the loss writing:

I feel that he is slipping more and more…He doesn’t know that he has dementia and thinks his problem is that something is wrong with his eyes….. He thinks he is in good health, and for the most part, he physically is… he does absolutely nothing himself…not even read or watch tv.. …This really is a terrible disease, both for the one who has it and those who spend their lives caring for them. It is truly a catch-22 because we wouldn’t want anything to happen to them either, so what on earth do we do?

New treatments may waylay the despair and devastation experienced by families and patients enduring this fatal neurological disease.